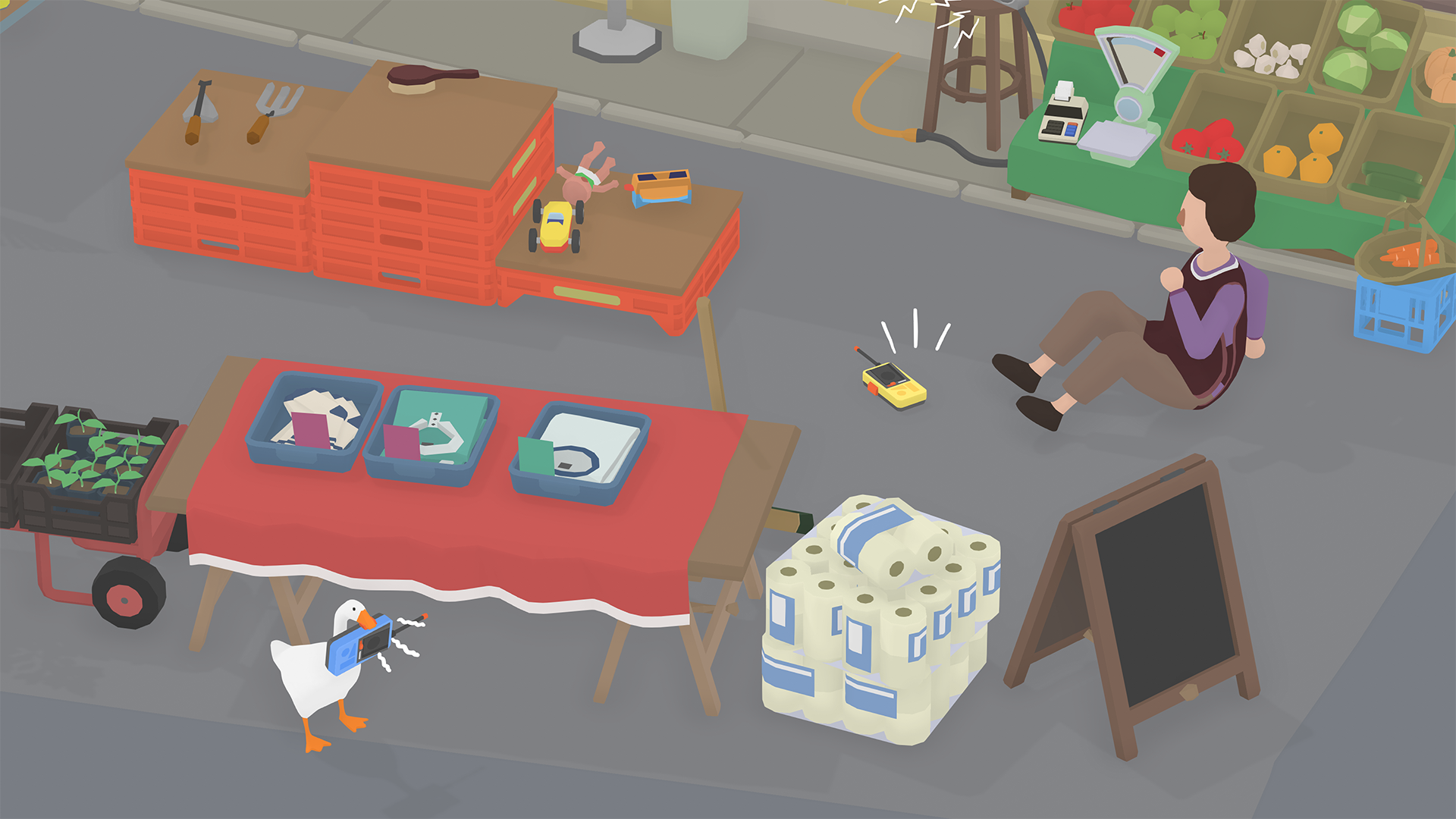 Screenshots courtesy of House House via their press kit.

For many of us, video games are a space to be our best selves. We can be Commander Shepard and save all of our crewmates, or we can be Yu Narukami and help everyone in town with their troubles. Of course, there are also plenty of games that let us act out vices. We can be nihilistic murder-machines in Grand Theft Auto. We can be selfish thieves or demonic mages in Skyrim. We can hurt people, steal from them, kill them.

But what if what you really want to do is play pranks and be troublesome? Annoy people, ruin their day? Typically, these verbs only crop up in simulation games (like, well, The Sims). In these games, we can poke and prod at those simulated characters, delight in their confusion and frustration. But we always act through some sort of interface. As the player, we’re just the green plumbob, we’re not really there. We’re separated by another layer of abstraction.

I guess if you think about it, a goose is also a kind of interface. The Untitled Goose Game provides a structure for simulated mischief and an avatar to enact it. That avatar is a goose. It’s a game where you do goose things like honk and flap your wings and steal stuff. It’s a game where you have a to-do list of tasks that are utterly incomprehensible, and extremely inconvenient, to the bumbling humans around you. Sometimes it’s about being mean and breaking people’s stuff. Sometimes it’s about being charming and wearing a cute bow. But it’s always about being a goose.

What makes the game brilliant is its ability to capture a very specific, mundane kind of antagonism. At its heart, the Untitled Goose Game is its own sort of simulation game. The silly routines of these people are perfectly tedious and droll, ripe for disruption. The game is structured around collections of puzzles that involve breaking these routines in increasingly elaborate ways. Sometimes the puzzle is simply figuring out what the to-do list description is even talking about. Sometimes it’s figuring out how to get away with the task without getting caught and interrupted.

The goose game knows how to delightfully acknowledge the strange interactions that players might have with its systems. It doesn’t just give you ways to cause mischief; it understands why mischief is so fun. It understands just how much to characterize its clockwork NPCs so that they’re fun to play pranks on. And it provides a perfect, guilt-absolving framework in which to get up to that mischief.

If you were a human, you probably couldn’t get away with all these shenanigans without feeling guilty, or at least facing consequences. But a goose! A goose is inscrutable and tenacious. A goose doesn’t care how you feel. A goose is mischief incarnate! And the goose game is very good.