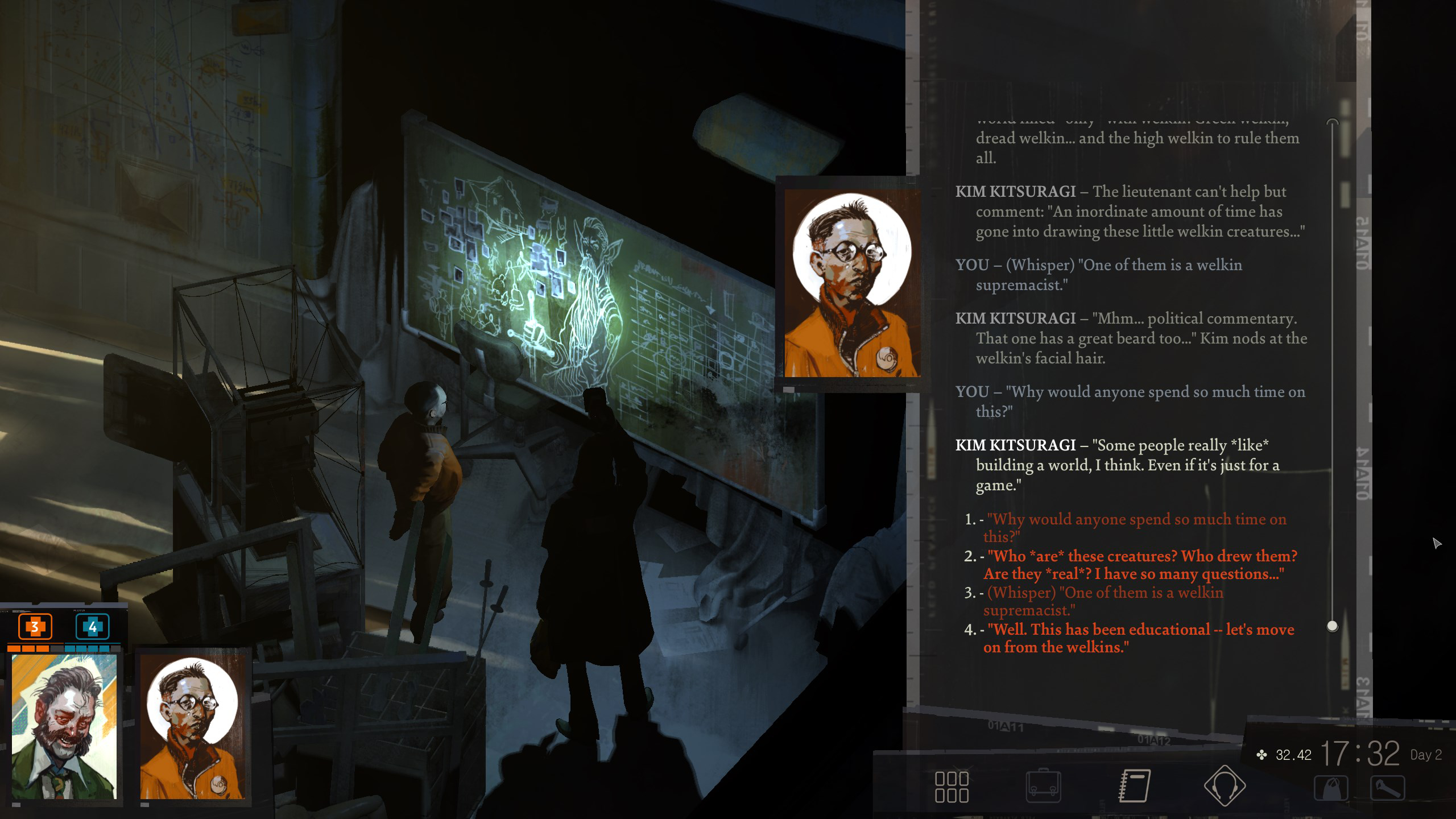 Disco Elysium is a role-playing adventure game that takes place in Martinaise, a lawless district of the occupied city of Revachol. Throughout Martinaise, there is evidence of a complex history of revolution, capitalism, and imperialism, etched into its people and places. As an amnesiac detetive, the player must piece themselves together and solve an elaborate murder case.

Disco Elysium covers a huge spectrum of emotions across its long playtime. Though often weighed down with despair, it has moments of stark hopefulness and peacefulness. As grim as the world is, its characters are often multidimensional. Nonetheless, they are still a means of critiquing a wide variety of political ideologies. The characters express beliefs that are folded into the history and mythology of the world itself.

Part of what makes this game interesting is the angle I’m approaching it from. I’m fairly comfortable with my own beliefs, but my political literacy is based more on reaction to what I see in the world around me than on any kind of formal education or personal pursuit. America is riddled with the abuses of capitalism, the gradual normalization of fascism, and the evils of centrism and incrementalism; those systems and ideologies are familiar to me.

But I’m largely inexperienced with socialist, communist, and anarchist ideologies. These things lie deeper in history, or are more niche. They’re less immediately recognizable in today’s world to those who aren’t part of the counterculture. My political education is, it turns out, still very limited. And so it surprised me that Disco Elysium managed to communicate so much about these ideas to me. It conveys so much emotional underpinning of revolutionary ideology, even when it’s only doing so indirectly through its world and characters.

The game’s world adheres broadly to a certain grim, urban realism, but also frequently swerves into the surreal and supernatural. It’s easier, in this context, to see characters as metaphors, ciphers for the systems that they commit themselves to. But even when it’s being metaphorical, the entanglement of storytelling with ideologies helps communicate them in more material (and often more damning) ways. The player can also make their own comments via dialogue options that align with various ideologies. An NPCs bitterness, exasperation, enthusiasm, or wistfulness can communicate a lot about what certain beliefs mean to them.

Despite its general hopelessness, Disco Elysium still manages to express a profound belief in the potential goodness of individual people. Not only that, it does so while communicating a real cynicism towards the police as an institution. Folks in this world know that the cops aren’t good, but the protagonist and his partner have opportunities to be good people and strive for things they believe in. The protagonist’s partner, Kim Kitsuragi, is a particularly stalwart example of a complex, conflicted, but fundamentally good person. This unwavering humanism forms a sort of juxtaposition and balance with the often overwhelming bleakness.

Looking back at what I’ve written, it’s clear that I don’t have the right vocabulary to talk about at length about political theory. But Disco Elysium makes me want to learn more. It uses its fantastic prose to communicate so much about politics and ideology. In fact, Disco Elysium might be the first game made me want to go read political literature. That’s pretty remarkable in its own right.