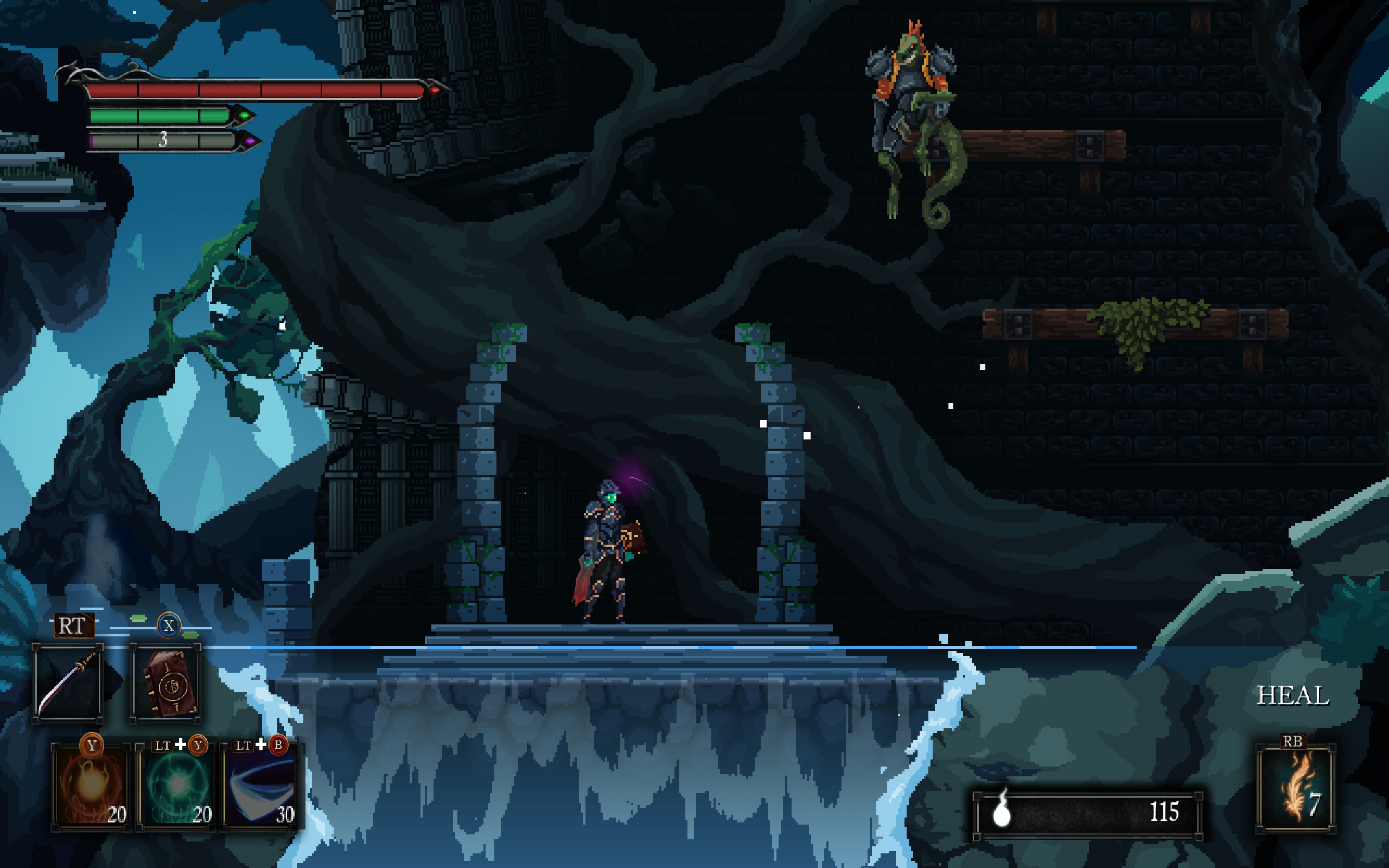 It’s a new week, and a new Metroidvania released. This one is Death’s Gambit, the debut release from developer White Rabbit. Except, it turns out, that Death’s Gambit is even less of a Metroidvania that Dead Cells, which I reviewed last week. While it does feature a large, interconnected world with unlockable shortcuts, it does not have the other piece of the genre: new abilities that unlock access to more areas of the world. I say this not to be pedantic, but so that I can judge this game on its own terms: not as a Metroidvania, but as an atmospheric Soulslike action-platformer. And a really good one, at that.

Death’s Gambit begins with a few cutscenes that set up the story: the player character, a man named Sorun, is on a quest into a war-torn land, when he meets an untimely end. But Death himself has a purpose for Sorun, and he signs a contract that will grant him life as long as he pursues Death’s goal: to destroy a source of immortality guarded in an ancient city, and coveted by surrounding nations. Following the brief introduction is a relatively peaceful tutorial area with a few unexpectedly tough enemies. The game uses the introductory area to show players the ropes before guiding them to the first boss, and then to a more open hub area (essentially, the Firelink Shrine of this game). 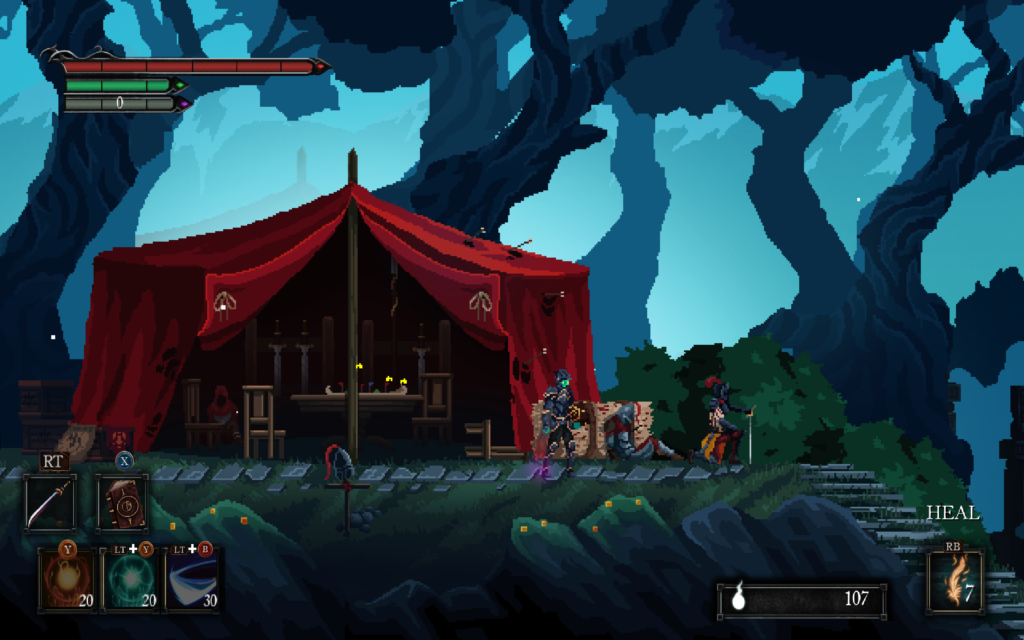 The hub area has a handful of NPCs to meet

The storytelling didn’t really capture me right away. But as I adjusted to the game’s atmosphere I found the writing to be pretty solid, and capable of pulling off some authentically emotional moments. It does suffer from some weird tonal hiccups, including a few overt references to other games that were pretty baffling (there’s even a reference to Passage, a contemplative art game from 2007). Death often chimes in with humorous interjections, but generally the game has a sort of somber-but-hopeful narrative tone, conveyed also through a dramatic soundtrack and some absolutely gorgeous pixel art. There were a few areas that I hoped would open up more, but all-in-all each of the spaces had a distinct and impressive look, often colorful and gloomy at the same time. In particular, Death’s Gambit has a few boss fight arenas that are both visually and mechanically compelling, and make for truly memorable fights. The art of this game allows its world to be bleak without being completely gray and moody (a problem I had with Salt & Sanctuary, which is one of this game’s few 2D-Soulslike contemporaries).

The most unique aspect of the game, however, is how it works mechanically. Its combat takes some adaptation, even for those familiar with the Dark Souls series, but finds ways to be rewarding in its own right. Sometimes enemy attacks feel improperly telegraphed, or the edges of their attacks manage to snag you, but in general the game feels balanced pretty deliberately. The combat isn’t completely souls-like: enemies are much more asymmetrical to the player and don’t seem to adhere to the same stats and resource pools. Stamina management is extremely crucial and certainly feels very limiting early on, but is surmountable with careful planning and levelling stats that improve its max amount and regen speed.

Hardcore souls players may find that the variations on the formula don’t make up for the lack of depth or variety. Death’s Gambit is an approximately 10-15 hour game, while any of the Dark Souls games can take well over 40 hours to complete a first playthrough. Progress through levels feels like it occurs at a different pace, and weapon upgrades feel a bit less substantial than in the Souls series. But Death’s Gambit has bits of creativity and interesting twists tucked around every corner. Design decisions feel like they’re best understood as thoughtful deviations from Soulslike staples. Dying does not cause the player to lose all their currency, but it does cause them to reduce the maximum charges of their replenishable healing item, which can then be restored by returning to where they died. Additionally, abilities can be found throughout the game that serve as additional weapon attacks, powered by accumulated soul energy. This energy charges by attacking normally, and each class of character charges it in some additional way as well (blocking, dodging, parrying, using items, etc.). 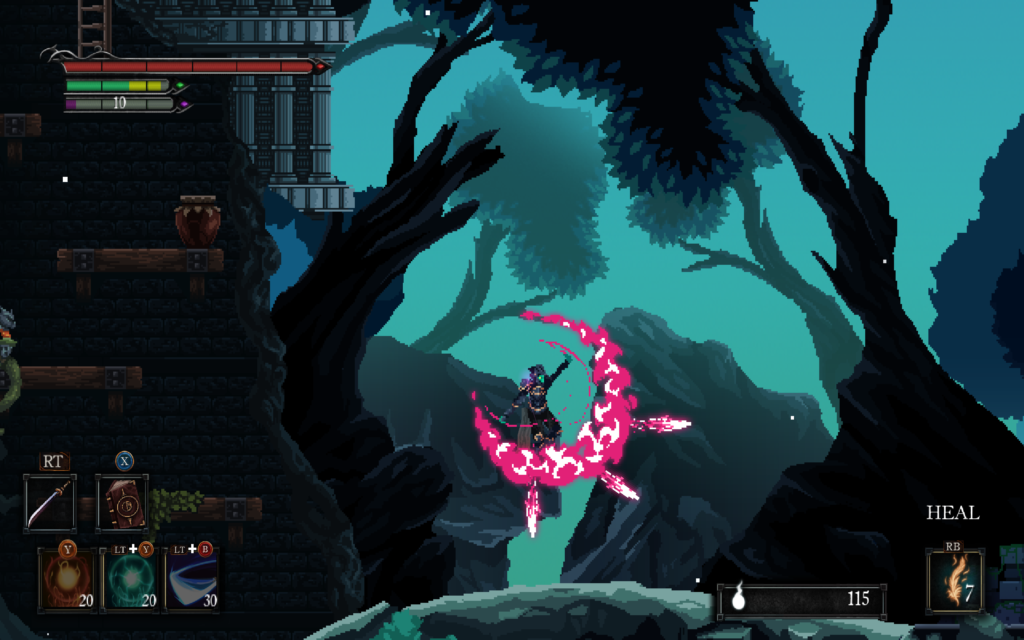 The wizard class uses a spellcasting tome that fires projectiles rather than a melee weapon.

All these little twists and modifications, and many others that appear in specific areas later on, make for surprising and challenging encounters. While I don’t think the game provides enough variety to justify playing multiple levels of “New Game +” difficulty modes, there’s a lot to love on a first playthrough and very compelling reason to come back with a different character class. True, the game could benefit from some variety within weapon types (e.g. more than one type of spear, for example), from more options for abilities and possibly from some retuning of stamina management. But it absolutely justifies a playthrough or two; not just because of its novel adjustments to the Soulslike formula, but also because it has an atmosphere and identity all its own. If you don’t like the Souls series, you probably won’t much care for Death’s Gambit. But if you do like the Souls games (and you’re not too much of a purist), it’s definitely worth your time.